Welcome to the third article of the Fast-Paced Multiplayer Implementation series.

In this article I’ll discuss my minimalist reliable UDP library implementation, and how the message delivery types it provides improve the demo’s client-side prediction and server reconciliation.

Here’s the demo: https://fouramgames.com/posts/netlib/main.html (Chrome recommended). The source is in the usual repository, in the netlib branch.

Note that remote entity interpolation isn’t yet at its full potential - it will be the subject of a later article.

This is a topic in itself, so for the demo I just assigned a unique integer to each host and used that as an abstraction instead.

In a moment of inspiration I decided to name my library netlib.

Here’s a basic diagram of the public-facing API. For the sake of conciseness some features and types haven’t been included. 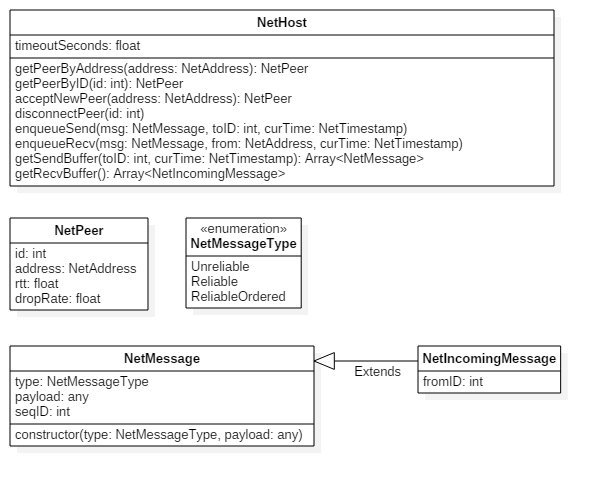 Using netlib in an application makes the update loop look like this:

In the demo’s case the lower network layer is the network model that was introduced in the first article. It’s a black box from netlib’s point of view.

This API isn’t very different from ENet or RakNet at this high abstraction layer. So while I’ll use netlib for subsequent articles and demos, it won’t stop someone using a real networking library from finding them useful.

Nothing has significantly changed on the server side. The world state is still sent as an unreliable message.

When the client receives a world state message however, it checks that its sequence ID is newer than the previous one. This has the effect of dropping late messages.

That’s all there is to it. This is of course easily reproducible using other reliable UDP libraries.

I used Glenn Fiedler’s articles on reliable UDP (Reliability and Congestion Avoidance over UDP and Reliable Ordered Messages) as references. I had also spent some time using ENet before so I drew inspiration from it for designing the API.

Below are some interesting tidbits I gathered while writing my library.

My solution was to send a dummy reliable “heartbeat” message containing only the latest acks to peers if no other up to date reliable message was sent that frame. This is done every time getSendBuffer is called, a possible improvement would be to let the rate be user-configurable.

Message round-trip time and drop rate are also only measured on reliable messages (using acks), so that’s another reason why heartbeats are necessary.

I looked at how other libraries and protocols do it for inspiration (Yojimbo, ENet, TCP). At some point in the future I’ll write about the inner workings of a few of them.

I settled on a really simple method. I assume that it theoretically takes exactly a round-trip time to receive an ack for a sent message. In practice I estimate that a message is lost if its ack is not received within a period of RTT + RTT variance * 2.

If I detect a lost message, I resend it with a new sequence ID. I also include the original sequence ID in it so that the recipient can avoid forwarding duplicate packets to the user. The recipient still sends an ack for a duplicate resent message though, or else the sender will keep re-transmitting it forever.

This is extremely reliable, but the fact that a lost message is only re-transmitted after a timeout period incurs unacceptable latency. We can reduce this delay by sending redundant messages at the cost of bandwidth.

While the message is in a limbo state (sent but RTT not yet elapsed), we can re-send the message a few times at a certain rate. This can be included as an optional setting for very time sensitive packets such as client inputs. Chat messages for example can do without.

Let’s add redundant re-transmissions (100ms intervals) and look at the distribution of the time it would take for messages to arrive at their destination:

Let’s see how much the redundancy costs in bandwidth:

We would then be using 250% the usual bandwidth 96% of the time. Game clients often send only input messages which are very small in size, so the redundancy can be dialed up significantly (with respect to the available bandwidth of course).

Pardon the napkin math. I hope it still manages to illustrate well the trade-offs of the redundant re-transmission strategy.

All buffers are implemented as circular arrays, per Glenn’s recommendation. There’s conceptually four buffers per peer in netlib:

netlib notifies an event handler when any assumption in the protocols is broken. Given reasonable buffer sizes, this only happens in extremely terrible connections. The default netlib handler for these errors disconnects the peer outright but the user may choose what to do depending on the error. netlib also generates timeout events.

A netlib host sends an unreliable disconnection message when disconnecting a peer. On reception the peer disconnects himself silently and notifies an event handler.

ENet does this better and sends the disconnection message as a reliable message and waits for acknowledgment (with a timeout).

There’s no connection protocol, it’s simply simulated by manipulating the objects directly in the JS runtime.

The road to production

I may revisit netlib in the future but it will probably just remain something I made out of necessity for use in a simulated network in a browser environment. Dissecting ENet/RakNet/Yojimbo’s code would provide more interesting content than further work on netlib.

Here are the many missing features necessary for deployment in a real game:

The next article returns to discussing application-level logic instead of UDP and the network layer. It’s about smoothing server reconciliation to prevent jarring visual artifacts when the client and server states diverge.