About time I posted something interesting, so here we go. I doodled a bit during the last couple of days. I took pictures of the two pages, and was surprised by my phone’s huge resolution, but it comes at a hefty price. The pictures are 4MB each!

On the first page I sketched a dozen new levels. They introduce two new traps: the wall and the portal, both self-explanatory. Actually I should explain the wall: a player can jump over it, or on it. Not all the first six levels on that page will be in the game though, or some will come at a later time. I feel like having flame pit and elevator levels for so long would be quite boring. I want to get the new traps in sooner than that to sustain the player’s sense of progression. The portal levels I have so far are pretty simple, but I plan to add levels which include more than one color-coded portal pair in the future. Those levels could get… quite challenging to beat

In the second page I sketched out the first enemy: THE DUMB ORC. His sole concern in life is to dash left when he sees you, no matter which traps lay ahead. If you let him, he may very well kill himself by walking over a flame pit or something. I find him a really cool addition, because first off he would be the first horizontal “trap” in the game, and he offers a lot of interesting puzzles because he’s able to interact with the world the same way a player can.

Getting the dumb orc into the game will require some fiddling with the code. I previously made the assumption that the player is the only entity that can interact with the world, so the traps do position checks only on the player. Ideally after this refactor I’ll be able to make any entity interact with the traps, so that’s going to be cool.

Here’s a mockup of what he could look like. I used the knight’s sprite as a template, so I still need to work on giving him a larger, more brutal silhouette. And he probably won’t be blue. This sprite was done before I changed the sky to a gradient, so now the whole blue family is out of question. Green would make him blend with the grass tiles, so all that’s left is red and family. Dawnbringer’s 16-color palette is definitely a challenge to use, but I like the vibe it gives.

All of this thinking about levels convinced me that I better make an in-game level editor, and quick. I’m currently using Tiled to lay them out, and it’s pretty painful. Here’s my level workflow at the moment: 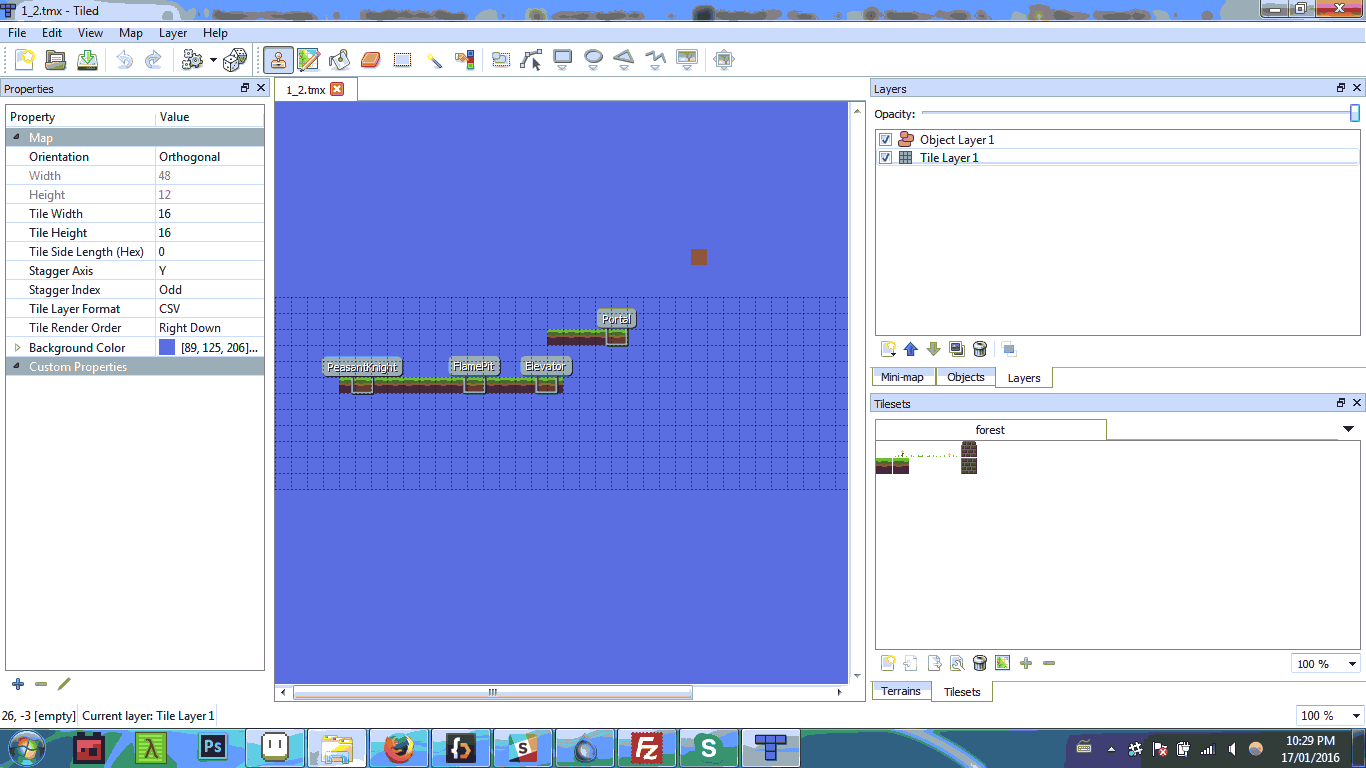 As you can see there’s a lot of guesswork to do when laying out the levels.

So, my new priorities are to get the wall, portal, and dumb orc into the game, to make levels for them using my painfully slow Tiled workflow, and then include a level editor. Oh and add that level timer and level unlocks thing. When that’s done I can call it 50% complete I suppose.